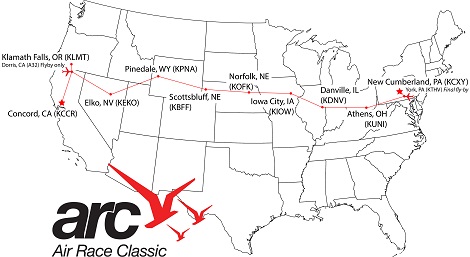 New Cumberland, PA — Capital City Airport in New Cumberland, Pennsylvania will be the terminus, or final stop, of this year’s Air Race Classic (ARC) which spans over 2,338 nautical miles.

The 2014 Air Race Classic will be held June 16–19. Racers will zoom through ten intermediate stops in four days enroute from Buchanan Field Airport in Concord, California in the quest for the fastest time.

This year’s ARC will have fifty-two teams and over one hundred female pilots compete for the championship title in the transcontinental air race. Follow the ARC teams on Facebook.

The race is an annual, all-female pilot air race in which pilot’s race against their own best speed in the small airplane of their choice. Racers will undergo briefings, flight planning, and a fly by study prior to take off.  Additionally, the aircraft must be “stock” models (no experimental) and have their handicap speed identified with a check pilot.  Many of the pilots race not only for the experience, but compete to refine their flight skills as the route changes each year in order to keep the race challenging.

The Air Race Classic carries on the long tradition of women’s air racing that dates back to 1929. Air racing became popular in the 1920’s, but women pilots were forbidden to race against the men in that era, so the women started their own.

The race attracts competitors of all ages around the world.  In 2013, pilots from Kosovo, Japan and Italy joined US pilots in the ultimate four day air race challenge. Collegiate teams make up nearly 20% of each year’s racers.

The race begins Monday, June 16, precisely at 8 A.M. and airplanes will take off every 30 seconds. There are 9 predetermined stops as the pilots make their way along the way eastward, where high speed low timing passes are permitted.
Once at the terminus, Capital City Airport, scores will be determined by a panel of judges and timers, and the winner will be announced at the gala Awards Banquet Saturday evening, June 21.

The Air Race Classic, Inc. is a nonprofit 501(c)(3) organization dedicated to: encouraging and educating current and future women pilots, increasing public awareness of general aviation, demonstrating women’s roles in aviation, and presenting and promoting the tradition of pioneering women in aviation.